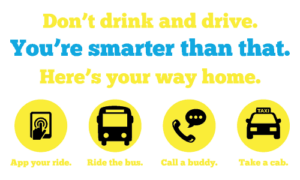 It might have been that Halloween fell on a Saturday night, or maybe it was just a lot of Halloween revelers were out enjoying the scary night, but a recent BOO-ze It & Lose It campaign in North Carolina netted a lot of drunk drivers.

The campaign was in partnership with almost 400 state and local law enforcement agencies, and when the dust settled there were 601 driving while intoxicated (DWI) arrests made during the period of October 30 to November 1st. In all there were 1,553 checkpoints and officers involved also issued a whopping 16,456 traffic and criminal tickets.

In addition to the checkpoints, the North Carolina Department of Transportation reached out on social media to remind people not to drink and drive. It’s called ‘Don’t Drink and Drive. You’re Smarter Than That,’ and it is designed to remind people that drinking and driving is easily avoided if you call in a designated driver or a ride service.

Because of the BOO-ze It & Lose It campaign, a lot of drunk drivers are now facing North Carolina’s DWI penalties. There are five levels of penalties in the state, with level 5 being the least severe. Jail time for a level 5 offender is only 24 hours, while jail time for a level 1A offender is at least 12 months. Offenders will see a drivers license suspension of at least 6 months to 1 year, but an ignition interlock is not required for a first time conviction.

If the roads were that busy with North Carolina drunk drivers on Halloween, it’s hard to imagine how the week leading up to Christmas and New Year’s Eve will be. No matter where you live, whether it’s in North Carolina or anywhere else in the United States, if you don’t feel as though you’ll make the right choice to not drink and drive, do yourself a favor: make sure you have a designated driver set up before you leave for the night.

3 Drunk Driving PSAs You Have To Watch Before The Holidays
Next Post: Florida DUI Expert Charged With — You Guessed It — DUI