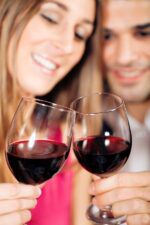 We’ve all watched a TV show or movie where a woman offers to drink a man under the table. Sometimes, as the story will go, she may actually succeed, but that’s just a bit of movie or TV magic at play. In real life it can take fewer drinks for a woman to become drunk than it would take a man, and there are quite a few reasons why alcohol affects women differently than men.

Women have less water in their bodies than men. Men have 61 percent and women have 52 percent, so when a woman drinks alcohol they can’t dilute it as quickly as a man.

Both women and men have an enzyme in their bodies called dehydrogenase, but women have a lower concentration of it. This enzyme metabolizes alcohol as it passes into the bloodstream, and because women have less of it, they can’t process alcohol as quickly.

Hormones can affect how you process alcohol

Hormone fluctuations throughout the month can affect how a women process alcohol, and if a woman takes medication like the birth control pill, she could feel a stronger effect from the alcohol she drinks.

Levels of body fat vary between people, but women generally have higher levels of body fat than men. Because fat doesn’t absorb alcohol, it can cause a woman to become drunk faster than a man.

You can take a look at this chart from drinkinganddriving.org to find out exactly how those drinks will affect you.

When you drink alcohol you should know it’s not going to affect you in the same way it would affect your husband, sister, brother, or friend. As long as you keep in mind that alcohol affects women differently than men, you moderate what you drink, and you don’t think you’re safe to drink and drive after a few drinks, you’ll be practicing safe consumption.

Here’s Another Way A DUI Conviction Can Derail Your Life
Next Post: What If My Lungs Are Too Weak To Blow Into An Ignition Interlock?