Arrested For DUI In Virgina? Your Mug Shot May Appear On Facebook

You are here: Home / General Information / Arrested For DUI In Virgina? Your Mug Shot May Appear On Facebook
March 25, 2016 by Matt Talley 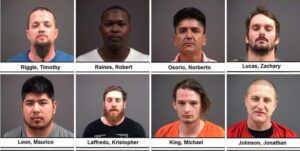 A driving under the influence (DUI) arrest isn’t something you can easily hide. Depending on the state, if you’re arrested for DUI you may have to go to jail, you’ll probably lose your driver’s license for a period of time before you even go to court, and if you’re convicted you’ll may be required to drive with an ignition interlock. That means blowing before you start your vehicle no matter who is in the car with you.

Now one county in Virginia wants to make it even more obvious that you arrested for DUI in the state. They started publicizing mugshots of people who were arrested for drunk driving on Facebook, and since the first time they shared, they’re moved on to sharing both photos and videos of offenders.

Public shaming might sound like a harsh step to take, but after Chesterfield Police arrested 102 suspected drunk drivers in one month last September, it was step that was needed. After all, if fines, jail time, and cost of an ignition interlock don’t work to stop drunk drivers, maybe having mug shots posted online will.

Just like everything that’s somewhat controversial, there are supporters and opponents to the sharing of mug shots online. While some people in the county think it’s a good idea and that ‘public shaming’ is a good way to stop drunk drivers, others have commented on Facebook that if an offender is eventually acquitted of the charge, that mug shot will be public record.

It’s true that what goes online stays online, and if someone is actually acquitted of DUI in Virginia, they may be able to ask for their mug shot to be taken down. But for the rest of the drunk drivers, it could be just the thing to stop a first time offender from turning into a repeat offender, and if that’s the case, the roads in Virginia will be that much safer for drivers.

Study Shows Drop In Deaths Thanks To Ignition Interlocks
Next Post: New Mexico Leading The Way For Drunk Driving Deaths