Breaking Down The Cost Of The Ignition Interlock Device

You are here: Home / General Information / Breaking Down The Cost Of The Ignition Interlock Device
September 24, 2014 by Matt Talley 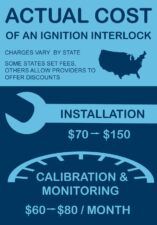 One of the first things you might think about after you’re charged with driving under the influence (DUI) is what the penalties will be. Most states will charge you an administrative fine, you might have to spend time in jail, and often you’ll be asked to attend a drug and alcohol education course. In states with all offender or multiple offender ignition interlock laws, you’ll also be asked to pay for and maintain an ignition interlock in your vehicle.

The offender must pay all costs associated with the ignition interlock. Although the cost will vary according to state, MADD estimates it costs approximately $70 to $150 to install and around $60 to $80 per month for device monitoring and calibration.

The price to install and maintain an ignition interlock device is minimal considering you are able to get behind the wheel and resume your normal driving activities. Just imagine what it would cost to pay for cabs or ride the bus for a period of six months or one year, and you’ll see the ignition interlock is a low cost and effective way to keep drinking drivers from offending again.

What You Need To Know About Monitoring Your Guardian Interlock
Next Post: Drive Sober App No Car Breathalyzer, But It Might Stop DUI