What Good Is a Designated Driver Who Drinks?

You are here: Home / News / What Good Is a Designated Driver Who Drinks?
March 7, 2018 by Matt Talley 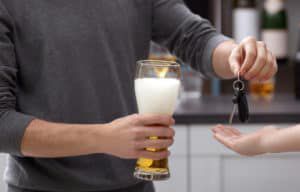 There is only one rule that a designated driver has to follow, but it’s a crucial one: do not drink. You’d think that it would be obvious, but a surprising number of so-called designated drivers end up in handcuffs.

It happened recently in Riverside, California. A police officer saw a Volkswagen doing 57 in a 30 mph zone. As it turned out, the speeder was also a drinker, with a blood alcohol concentration (BAC) of .182, more than twice the legal limit. As per the law, his car was impounded.

The driver had been the designated driver for his 3 passengers. Why did he drink?

Perhaps he had “just one drink,” and the diminished judgement from that led to a second drink. That’s the procession that leads to a DUI.

When you agree to be a designated driver and you drink, you’re not just letting down your friends – you’re endangering them. If you’ve agreed to do the job for the evening, take it as a matter of trust. Do the right thing and stick with soft drinks. You’ll wake up the next day still having friends, your freedom – and your vehicle.