Driving Drunk With a Child in the Car Equals Child Abuse

You are here: Home / News / Driving Drunk With a Child in the Car Equals Child Abuse
April 18, 2018 by Matt Talley 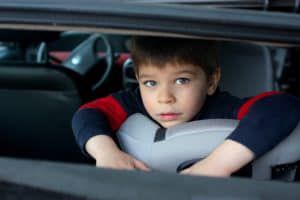 You may love your children more than anything in the world. You may treat them well, keeping them out of harm and never laying a hand on them.  But if you let them ride in a car that you’re driving drunk, you’re a child abuser.

So says, most recently, the Las Cruces Police.  A man from Hatch, New Mexico was driving in Las Cruces recently when, according to reports the police received, he swerved across a couple of lanes on Solano Drive.  When he was stopped, the police found several cans of beer, an odor of alcohol – and two boys, aged 8 and 10.

Once the failed the breathalyzer test, he was charged with two counts of child abuse as well as aggravated DWI.

Unlike most states, New Mexico does not have a specific child endangerment law which raises the penalties if a drunk driver has minors in the vehicle.  However, drivers can be charged with child abuse, which is a third degree felony in New Mexico, carrying a 3-year prison sentence and fines of up to $5,000.  And that is just for a first offense.

The need for such laws is understandable: as bad as drunk driving is, it’s worse when adults betray the trust that children place in them by endangering them.

Here, though, is another way to look at it: all drunk driving can be child endangerment. Impaired drivers don’t just risk their own lives or those of their passengers. They’re also placing at risk other drivers, other passengers, and pedestrians.  Those can include children, and sadly, they often have.

All DWI laws exist for the protection of innocents. The most vulnerable of us need the extra protection afforded by child endangerment and child abuse laws. For that reason, road safety advocates have for many years pressed for stronger measures for those who put young lives at risk.