You are here: Home / News / Driving Drunk And Playing Pokemon Go Will End With You In Prison
January 25, 2017 by Matt Talley 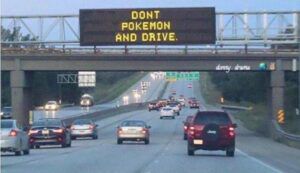 2016 will go down in the record books for a few things, but if you think back to summer 2016, you’ll surely remember the huge crowds of people walking around and playing Pokemon Go. It’s fine to enjoy the game, but it’s not a good thing when someone is driving drunk and playing at the same time. Unfortunately it seems to have happened all too often this past year.

A recent crash in Virginia Beach occurred when a man was driving drunk and decided to pull out his smartphone to play Pokemon Go at the same time. The fact that he was driving distracted was enough to cause chaos, but when you add alcohol to that mix you end up with a situation that involved him crashing into three cars and ending with hitting a teenage pedestrian.

Thankfully the pedestrian is going to recover from her injuries, but the man who hit her while driving drunk and searching for Pikachu will be spending a significant amount of time behind bars. He’s received a host of charges including maiming as a result of driving while intoxicated, and he’s expected to receive up to thirty six years in prison.

Incredibly, the offender from Virginia Beach isn’t the only person who’s ever made the choice to drive drunk while playing Pokemon Go. Another man from Vermont crashed this summer while driving drunk and playing Pokemon Go, and he was arrested after blowing a .20 on a breathalyzer. That level of drunk driving is lethal on its own, but when you pair it with distracted driving? He’s fortunate no one was injured or killed.

There were also two other men who were arrested for, you guessed it, driving drunk and playing Pokemon Go this past summer. They crashed separately into trees, one vehicle caught fire, and they were both very fortunate to escape without significant injury.

Let’s hope that when 2016 drew to a close it also closed the chapter on Pokemon Go and driving drunk, and let’s hope that this is the last time we hear of someone searching for Pokemon at the same time.