There are a lot of things to love about Illinois, but the amount of drunk drivers on the roads isn’t one of them. In 2014, 281 were killed in alcohol-related crashes, and over 32,000 driving under the influence (DUI) arrests were recorded. You can believe Illinois police have seen it all, but even a seasoned police officer would have been shocked at what a drunk driver in Roselle, Illinois did recently.

It’s one of those things you have to see to believe, so take a look at this video and you’ll understand why this drunk driver went viral.

The driver was 54 year old Maryann Christy. It’s pretty common for someone driving under the influence to strike trees, poles, curbs, or even buildings, but it’s definitely not common for a drunk driver to strike a tree and then keep on driving. 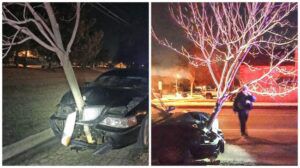 Imagine the sheer force you’d have to hit the tree to have it planted in the front grill of the car. It was enough to make Christy’s air bags deploy, but despite both blocking her view over the steering wheel, she continued to drive.

As you can see in the dashcam video, when she was pulled over by the officer she cruised over to the side of the road and simply opened the window. It didn’t take long for the officer to arrest her for DUI.

Drunk drivers in Illinois face numerous penalties for drunk driving. First offenders will spend up to 1 year in jail, pay up to $2,500 in fines, and lose their driver’s license for a minimum of one year. Because it’s an all offender ignition interlock state, any offender must install an ignition interlock in any vehicle they drive.

Ripping a tree out of the ground because you’re driving drunk is bad, but there is something good about this video. It just might deter someone else who’d consider drinking and driving, because you too could end up with a tree in your car.

Only In The UK Would There Be a Condom Breathalyzer
Next Post: Do You Know These St. Patrick’s Day Facts And Myths?