Drunk Driving Crashes Can Cause Injuries That Last A Lifetime

You are here: Home / General Information / Drunk Driving Crashes Can Cause Injuries That Last A Lifetime
January 4, 2016 by Editorial Staff 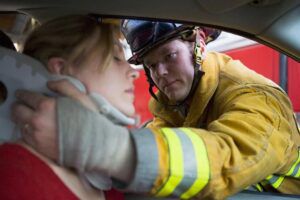 There’s no question that drunk driving crashes claim the lives of thousands of people each year throughout the United States. According to the Centers for Disease Control and Prevention (CDC), there were 10,076 people killed in alcohol-related crashes in 2013 alone.

Those fatalities are devastating, but when you’re just looking at numbers and data it’s all too easy to overlook another statistic: the people who survived those crashes, and it’s safe to say that the majority of those drunk driving crashes were no simple fender benders.

Because of the speed and violence that’s often involved, the impact of has the potential to cause critical injury to anyone unfortunate enough to be involved in a drunk driving crash. That’s exactly what happened to a police officer from New York State who recently died from injuries he sustained in a drunk driving crash, only his injuries happened nearly 18 years ago.

When a drunk driver sailed straight through a red light in 1998, he crashed into Sgt. Donald Conniff, an officer who was on his way to work for the day. He was ejected from his vehicle and suffered head injuries that left him alive but unable to take care of himself. After 18 years of care, he died from complications of those injuries.

It might be hard to believe that someone would never recover from injuries related to a crash, but it happens all happen all too frequently. The CDC estimates that in 2013 crash deaths and injuries resulted in over $44 billion dollars in medical and work loss costs. But when you compare that to the emotional pain and physical pain endured by victims and the families of victims, that’s a drop in the bucket.

The best way to avoid injuries or death related to drunk driving crashes is to avoid drunk driving. Although there is no control over whether a complete stranger will make the choice to put the keys in the ignition after a night of drinking, you can choose not to put yourself and others at risk by making the choice to drive sober or not at all.