You are here: Home / General Information / There Are A Lot Of People Up North Who Are Driving While Impaired
May 16, 2016 by Matt Talley 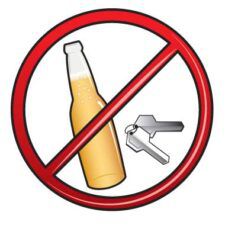 Most people know that driving while impaired is the wrong thing to do, but some people put the blinders on about how dangerous it is. They really think a drunk driving crash could never happen to them. That is until they crash, someone crashes into them, or someone they love dies due to a drunk driver. Suddenly all of the crash statistics and data out there on how prevalent drunk driving will seem shocking, because you’ve really never thought about it before.

If the Northern states are any indication, there are a lot of people not really thinking about the dangers of drunk driving. According to a study from CarInsurancecomparison.com, there are several Northern states that have a failing grade when it comes to driving while impaired.

The study took data from the National Highway Transportation Safety Committee and analyzed it for driving fatalities that resulted from a blood alcohol content (BAC) of .08, arrests for driving under the influence (DUI), and the penalties for DUI as set out by each state.

According to CarInsurancecomparison.com, these are just two Northern states with the most fatalities and driving under the influence (DUI) arrests in 2015.

Driving while impaired in North Dakota

According to North Dakota data, one alcohol-related crash happened every 8.9 hours in 2014. North Dakota is at the top of the heap for both alcohol-related fatalities and DUI arrests, and statistics released from a 2009 study by the National Institute on Alcohol Abuse and Alcoholism showed the state also ranks with some of the highest consumption of alcohol in the North.

Besides heavy drinking, another reason why North Dakota could be at the top of the list is thanks to the state’s lax drunk driving penalties. They only require 10 days jail time for a second DUI offense, a one year driver’s license suspension, and no there is ignition interlock requirement for any offender.

Montana’s traffic crashes doubled in the first three months of 2015, and almost ¾ of crashes that take place in the state were due to drunk driving or failing to put on a seat belt. Crashes could be increasing because first offenders in Montana may not be required to use an ignition interlock. It’s up to the judge whether or not they do for a first offense, and the person will only lose their driver’s license for 6 months.

These are only two out of ten states on this list, and this is definitely a top ten list no one wants to be on. Maybe these states should take a look at this data and try to improve their drunk driving records, otherwise they’ll continue to have the distinction of having some of the most dangerous roads to drive on.

What’s New In Minnesota Drunk Driving?
Next Post: Is This The Most Shocking Anti-drunk Driving PSA Of All?