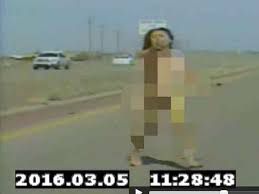 New Mexico has been leading the way in the United States, but not in a way the state might like. It has the highest rate of alcohol-related deaths by a huge margin, and it’s been at the top of the heap for drunk driving deaths since 1997. 2014 stats from the Centers for Disease Control and Prevention show that 51.2 per 100,000 people in the population of New Mexico lost their lives due to alcohol.

Statistics might give you an idea of what’s going on in the state, but it’s still pretty shocking when you see what’s happening on the roads of New Mexico every day. Take a recent case in Santa Fe County for example: police pursued a drunk driver cruising at 100 mph down a busy highway, watching as she ran a light and was hit by another vehicle. With her vehicle totaled on the side of the highway, you can imagine the shock the police officers felt when she jumped out of the car and ran across the highway completely naked. It was all caught on dashcam,and you can see the video here.

Police apprehended the naked woman, and they had to restrain her and cover her with a tarp before putting her in the back of the squad car. She resisted arrest at the county jail by attacking the officers, and although she blamed her behavior on seizures and a cyst in her brain, she later admitted to drinking whiskey and taking drugs. As for why she was driving naked, she told the police officers she was hot.

Believe it or not, it’s legal to drive naked in most parts of the country. What is illegal is driving under the influence. With a crash this violent, she should feel fortunate she’s alive and able to drive naked another day, if and when she ever gets her license back.

Arrested For DUI In Virgina? Your Mug Shot May Appear On Facebook
Next Post: Noah’s Law Gets Support From MADD’s Co-founder