You are here: Home / General Information / The Antarctica Party Is Over Now That Breath Tests May Be Required
October 28, 2015 by Matt Talley 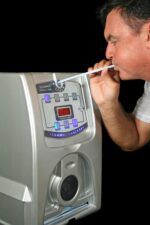 How would spend your free time if you were working in Antarctica? The sub-zero temperatures would mean you couldn’t spend a lot of time outside, and the remote location would take the idea of shopping or hitting up a tourist attraction out of the equation.

That’s why it’s not surprising that a safety audit of released by the National Science Foundation Office of the Inspector General has uncovered rampant alcohol consumption by the people who work in these remote locations, and after a task force reviewed what was going on, they’re recommending random alcohol testing using a breathalyzer.

If you work at a research station in Antarctica, there are very strict rules about drinking alcohol. Clearly the cabin fever was getting to them, because when officials visited one lab, they found alcohol stashed in places like the work refrigerator and under desks. Someone had even set up their own brew station right at the workplace.

Officials noted that employees were also exhibiting odd behavior beyond what you’d expect from people at a remote facility. From fighting to indecent exposure, the employees were acting out.

Despite all of the indications something was off, the officials acknowledged that employees were rarely required to submit to a breathalyzer test. All of the signs were there, and alcohol is known to affect judgement, coordination, and impulsive behavior, but breathalyzers were not brought in to determine what was causing the odd behavior.

The people behind the safety audit are recommending a more effective use of breathalyzers at the bases, and they’d like a review of how to legally proceed with mandatory breathalyzer tests for all research participants.

They might have been just trying to stave off boredom in a remote location, but clearly the party is over up in Antarctica now that mandatory breathalyzers could be part of the program.