You are here: Home / Law / Are Scarlet Letter Plates Coming To Mississippi?
February 9, 2016 by Matt Talley 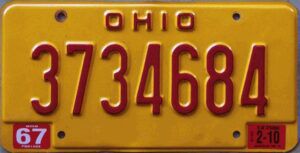 If you’ve ever been behind someone while driving and noticed that they have yellow license plates with red lettering, you probably wondered why. Scarlet letter plates are used to mark people who are repeat driving under the influence (DUI) offenders, and they warn both the public and law enforcement that the person driving has been convicted of DUI more than once.

Scarlet letter plates aren’t used in every state. Ohio has had them since 1967, but they weren’t mandatory until January 1st, 2014 when the state decided to toughen up their DUI laws. The state of Georgia also uses different plates to identify repeat DUI offenders, but their plates use numbers on the plate instead of obvious colors.

Now the State of Mississippi has proposed a law to bring scarlet letter plates to Mississippi too. House Representative Gary Chism has drafted a new that will require repeat offenders to use the plates, but some opponents feel the law is designed to publicly shame DUI offenders.

Scarlet letter plates will easily identify someone as a drunk driver, but do they cut down on alcohol-related fatalities? Data from Mothers Against Drunk Driving (MADD) says it’s just as likely that people in Ohio and Georgia will die in an alcohol related car crash than any other state, so penalties like scarlet letter plates may not have any effect on someone’s decision to drink and drive.

The proposed bill is still being drafted, so it’s not set in stone that Mississippi will require scarlet letter plates for repeat offenders, but at least there’s one true way to stop repeat drunk drivers in Mississippi: ignition interlocks. Someone may not be able to identify an offender with an ignition interlock just by looking at the car, but it will stop them cold anytime they try to drink and drive.

Drinking And Driving In Florida? Leave The Kids At Home
Next Post: Man Gets Life In Prison After He Decides To Drive Drunk For 12th Time »