Teens Take To The Test Track To Learn About Distracted Driving

You are here: Home / General Information / Teens Take To The Test Track To Learn About Distracted Driving
August 29, 2014 by Matt Talley 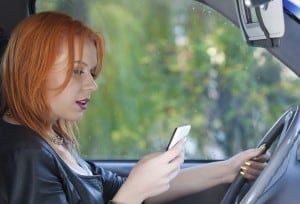 Distracted driving is a growing problem in the United States, and distraction is one of the biggest issues facing teen drivers today. 10% of all drivers under the age of 20 who were involved in fatal crashes were distracted at the time of the crash, and they make up part of an estimated 421,000 people in all age categories who were injured in distracted driving crashes in 2012. This number is up from 2011, when 387,000 people were injured.

To give teens an idea of how distraction can affect their driving skills, the Livingston County sheriff department put 40 teenagers, all between the ages of 15 to 18, behind the wheel of vehicle and asked them to drive through a course designed specifically to simulate distracted driving. The track is part of the ‘Distracted Driving Initiative’ where teens attended a classroom session before they drove on the test track.

The teens drove with supervision of the police and took part in 4 distracted driving scenarios that included everything from a blaring radio, passengers screaming, wearing goggles to mimic drinking and driving, and letting the teen text while driving. What happened when the teens were distracted? They drove over orange traffic cones and swerved out of their lanes. Imagine if that was real life and the cones were other cars.

Most teens taking part in the test track admitted they underestimated the power of distracted driving. The test was also a good reminder of how little time it takes to crash a vehicle. Livingston County sheriffs told the teens that a vehicle will move 70 feet per second when you’re driving 55 mph, and anything can happen in that one second.

Sometimes it takes a wake up call and real-life lesson to learn just how dangerous texting while driving can be. It’s safe to say that these teens learned their lesson.