Only In The UK Would There Be a Condom Breathalyzer

You are here: Home / Offbeat / Only In The UK Would There Be a Condom Breathalyzer
March 11, 2016 by Matt Talley 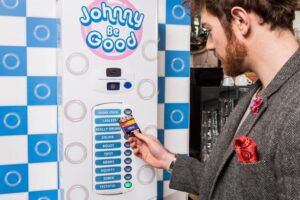 You’ve probably been to a bar or two that had an in-bar breathalyzer. The devices hang on walls, require a payment to use, and are meant to provide patrons a simplified way to check if they are over the legal limit of .08. They should never been the deciding factor in whether someone drinks and drives because not all of these breathalyzers are as accurate as police grade breathalyzer or an ignition interlock, but if you want a quick look at your approximate blood alcohol concentration, you should definitely feel free to blow.

If you blow into the device and you’re under the legal driving limit of .08, the machine will dispense a free condom. If you blow over .08, you won’t receive a condom and it will give you a rating of how drunk you are.

The UK only has one Johnny Be Good machine right now, but the people behind it, Match.com, are considering launching it across the country. They feel it might make people more aware of the fact that they are using alcohol as liquid courage when it comes dating, and because alcohol lowers your inhibitions and makes you lack judgement, it might make people think twice about jumping into a fling with someone they’ve just met.

The downside of a machine like Johnny Be Good? If someone is determined to head home with someone they’ve just met, they might just skip the condom altogether. Using a breathalyzer to determine whether or not you can access a condom can also make breathalyzers used to determine blood alcohol concentration seem less serious.

As long as blowing into a Johnny Be Good breathalyzer or an actual breathalyzer doesn’t result in someone making a bad decision, it seems likes it’s all in good fun.