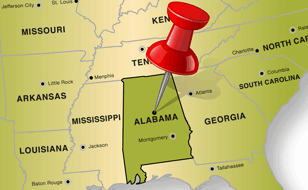 Alabama has two sets of procedures that you must attend to when you have been charged with a DUI—administrative and judicial. We suggest that you consult with a DUI attorney immediately to make sure you get the best advice for your particular situation as laws are always changing.

Administrative License Revocation (ALR) Procedures
Alabama Department of Public Safety
Alabama is one of 42 states that has implemented ALR which means that your license will be confiscated immediately if your BAC is above .08 OR if you refuse a BAC test. Your license will either be suspended or revoked at that point, even though you have not been officially convicted in a criminal trial. In fact, you can be charged with an administrative license suspension even if you are not later charged with driving under the influence offense. This action was designed to be in addition to and separate from the traditional DUI judicial conviction penalties such as license suspension, jail time, community service hours, ignition interlock device, and alcohol and drug rehabilitation.

You will be given a 15 day grace period during which you can drive under a temporary driving permit issued by the officer at the scene. During that time, you can request a hearing to challenge this case. This case will be heard by an administrative law judge. If you do not request a hearing, your license will be automatically suspended on the 16th day for 90 days.

Judicial Procedures
Alabama courts are required to order the installation and maintenance of ignition interlock devices (IIDs) for first-time offenders when their blood alcohol concentration (BAC) levels are .08 percent or higher, as well as requiring IID installations for all repeat DUI offenders. Ignition interlocks must also be installed on any and all vehicles operated by the offender and the offender is responsible for any and all costs associated with the IIDs on all vehicles, such as the installation, monthly lease payments, maintenance fees, and removal.  These IIDs must be obtained only from certified providers within Alabama.