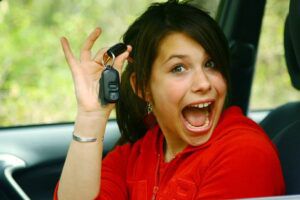 As a parent, there’s every reason to be scared when a teen gets a driver’s license. The freedom they get from being handed the car keys can translate into reckless behavior, and reckless behavior behind the wheel can lead to teen crashes.

Fatal car crashes are still the leading cause of death among teens, but there are 3 new pieces of technology that will track your teen’s behavior so you can relax when they’re out in the car by themselves.

Technology to stop them from drinking and driving

An ignition interlock is a device that, once installed in your vehicle, will require your teen to submit a blood alcohol concentration (BAC) sample before the car or truck will start. Ignition interlocks are voluntary in many states, so you have the option of installing one if you’re worried that your teen will drink and drive.

Ford MyKey is available in any Ford vehicle with the MyFordTouch infotainment system installed. It’s a special key parents can use to control the settings of the car including setting a maximum speed limit of 80 MPH and adjusting the audio system so the teen can’t turn up the music too loudly. The radio will also not turn on if the seat belts aren’t fastened, so your teen will be forced to buckle up.

Technology to limit where your teen drivers

Unlike the Ford MyKey, the General Motors Family Link System won’t stop your teen from speeding. What it will do is stop your teen from driving outside of a certain area. You set the perimeter they can drive within, and if they go outside of it, you get a text message. You can also locate the car or truck at any time just by going onto the GM OnStar website.

From speeding to drinking and driving, it’s nice to know technology has advanced to the point that there are ways you can protect your teen before they make the wrong decision while behind the wheel.

33 Years In Jail For Drinking And Driving
Next Post: When Parents Are Caught Driving Drunk With Kids In the Car