Anti-Checkpoint Lawyer Arrested At, You Guessed It, A Checkpoint

You are here: Home / Law / Anti-Checkpoint Lawyer Arrested At, You Guessed It, A Checkpoint
September 11, 2015 by Matt Talley 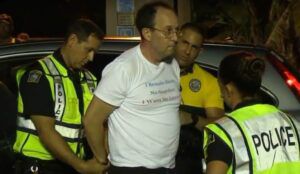 Some of the most unexpected videos end up going viral. From cats that play the piano to a mutant giant spider dog, you can never predict what’s going to show up on your home page next. That’s why it’s not surprising that a Florida lawyer’s video on how to avoid a driving under the influence (DUI) charge became so popular. It’s also not surprising that very same lawyer ended up in handcuffs recently.

It all started innocently enough. Warren Redlich, a DUI lawyer in Boca Raton, had a mission to tell the public about the uselessness of checkpoints. He called it the ‘Fair DUI’ program, and he wanted to show a way for drivers to avoid a DUI charge if they were stopped at one. Demonstrating his method in a video, he put it up on YouTube and viola, he’s had over 3 million views.

His method is simple: when you’re pulled over at a checkpoint, instead of rolling down your window and interacting with the police, you should just put a sign on your window that says, “I remain silent, no searches,’ and show your drivers license and registration through the window.

Redlich feels that a checkpoint violates his 4th amendment right of protection from illegal searches. He also feels that checkpoints are useless publicity stunts on behalf of the police, and although he and other people who have tried his method swear it works, his luck ran out recently at a DUI checkpoint in Coral Gables.

The officers in question gave him repeat warnings to open his window, and they didn’t think much of his documents on the glass. The arresting officer opened the door and put Redlich in handcuffs. After three hours, he ended up leaving with a failure to show a drivers license ticket, and he’s happy because he feels the police had nothing to charge him with. He’s also excited that his Fair DUI program gets a chance to have some face time in court.

But he’s not out of hot water yet: officers in Coral Gables are still contemplating charging him with obstruction of justice, and his court appearance may put an end to his Fair DUI program once and for all.

The real problem here? By promoting the Fair DUI program, Redlich is giving drunk drivers a way out. How many drunk drivers have slipped through a checkpoint because of Redlich’s video? There’s no way to know, and those drivers could go on to a crash where they injure or kill someone, all because Redlich wants to help people get away with DUI.

No one knows what will happen once this case hits the court, but at least Redlich’s arrest might make a few drivers think twice about the possibility of using his method to get away with drunk driving.