Should Bartenders Stop You From Getting Arrested For Drunk Driving?

You are here: Home / Law / Should Bartenders Stop You From Getting Arrested For Drunk Driving?
October 3, 2017 by Matt Talley 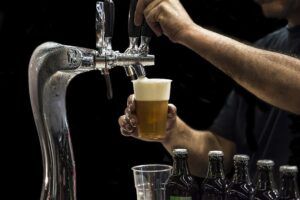 It’s a pretty common scenario: a person goes into a bar or pub and he or she has too much to drink. They make the decision to get behind the wheel of a vehicle, and once they do, they crash the car or get stopped by police.

The issue that led up to the arrest was that they obviously drank too much alcohol. But who was responsible for the amount of alcohol they consumed? On one hand it’s the drinker, of course, but if a California bill passes, it may also be the responsibility of the bartenders and servers as well.

The bill was drafted in honor of two UCSD medical students, Annie Baldock and Madison Cornwell, who died in 2015 after a drunk driver drove the wrong way down a street and crashed into them. The driver had been drinking in a bar and both his friends and the bar staff had warned him not to get behind the wheel of his car, but no one stopped serving him alcohol and he drove anyway.

The bill passed through both the Assembly and the Senate, and it’s now on its way to the Governor’s desk. If it’s signed by the Governor, any bartender or server in California would receive mandatory training on alcohol responsibility, how not to overserve, what their legal obligations are to their employers, and how to spot other issues.

If California passes this bill into law it won’t be the first state to do so. Oregon also has a similar program for training bartenders and serving staff, and this can assist with the all too common issue of bartenders who are unaware of how many drinks they can serve before a patron should be cut off.

Along with passing a new ignition interlock law that will be in effect in the new year, this bill could stop more Californians from driving drunk and lower the rates of people arrested for drunk driving. Given the track record of the state right now, that would be good news.

Before You Get Arrested For DUI, Try An Interactive DUI Experience
Next Post: Will Utah’s New Legal Blood Limit Mean Different Penalties?