Friend Arrested For DWI? Don’t Pick Her Up While Drunk.

You are here: Home / Offbeat / Friend Arrested For DWI? Don’t Pick Her Up While Drunk.
August 1, 2017 by Matt Talley 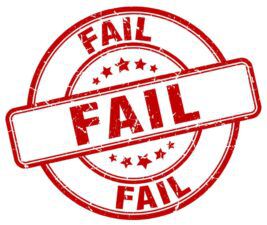 But no one was sober behind the wheel after a man in Louisiana was arrested for DWI recently. Police pulled over a vehicle full of people and arrested the driver, and the rest of the group was left in a parking lot to call a cab to get home. 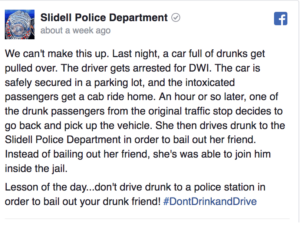 Instead of staying home, one of the passengers headed back to the parking lot, retrieved the car, and went to the jail to bail out her friend. The problem? She was also drunk driving, so when she arrived at the police station, she was also arrested for DWI. Police were considerate enough to place her in a jail cell with her friend, and whoever picked them up the next day must have had quite a story to tell. It’s such a crazy situation that even the Slidell Police Department decided to put it on their Facebook page.

Instead of one person heading to court to be sentenced to Louisiana drunk driving penalties, now there are two. That’s two people paying fines, possibly spending up to six months in jail, losing their driver’s license for a year or two depending on their blood alcohol concentration (BAC) at the time of arrest, and two rounds of community service.

The good news for both offenders? Louisiana allows their offenders to obtain a restricted driver’s license immediately when that person installs an ignition interlock in their vehicle for the entire suspension period. That means that these two offenders will be able to drive again as soon as they install their interlock, and hopefully the next decision they make while under the influence is to call a cab.

Should The Lookback Period Be Removed From New Mexico DWI Laws?
Next Post: NSC Hands Out An “F” For Florida Drunk Driving Crashes