You are here: Home / Offbeat / You Might Want To Skip The Cartwheels During Your Field Sobriety Test
March 14, 2017 by Matt Talley 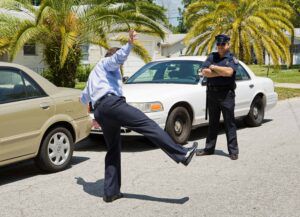 If you’ve ever been stopped for suspected drunk driving, you’ll know that standardized field sobriety tests (SFST) are a common way police officers use to assess someone they believe is driving under the influence.

During the traffic stop they will generally perform up to three SFSTs: the horizontal gaze nystagmus (HGN), one-leg stand tests, and the walk-and-turn. Each test is designed to see whether or not alcohol is affecting a driver’s hand-eye coordination, reflexes, and motor skills.

Police officers generally stick to these three field sobriety tests, so imagine how surprised they were when a drunk driver added her own take on a field sobriety test during a routine traffic stop. The driver, from Albuquerque, New Mexico, was stopped by local police, and when they asked her to exit her vehicle she was unsteady on her feet.

That’s when the officer asked her to walk in a straight line, and when she tried and failed she decided to a do a cartwheel instead. Not only that, but she did several cartwheels despite police asking her to stop. One of those cartwheels ended with her leg striking the officer, so on top of being charged with aggravated drunk driving, she was also charged with battery of a police officer. All of this because she decided to put her own twist on a field sobriety test.

Alcohol has a way of making a bad idea seem like a great one at the time, and this is a good lesson for any driver who thinks that taking liberties with a field sobriety test is a good idea. Saying no to a field sobriety test might not have the same repercussions as saying no to a breathalyzer test, but not following the police’s rules for these tests can land you in hot water all the same.