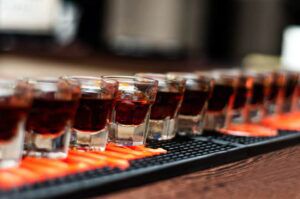 Drinking alcohol is something people do every single day, and because it’s acceptable and legal to consume alcohol as long as you’re not driving and your of legal drinking age, it’s often thought of as no big deal.

But drinking alcohol can create serious long-term consequences you might not have thought of. Some can happen after drinking alcohol once, while others can be the result of long term alcohol use.

You could be stopped for drunk driving

One night of drinking alcohol can result in you getting behind the wheel of a car, and if you do that, you have the potential to injure or kill yourself and others in a crash. If you manage to live to get arrested for drunk driving, you’ve got a long road ahead of you.

If you’re arrested after a crash that kills someone you’re going to spend time behind bars, and if you’re arrested for drunk driving without a crash, you’ll still lose your driver’s license, pay fines, and depending on your state, have to install an ignition interlock in your vehicle. It can take a year or longer to resolve a drunk driving case, and although some penalties are immediate, others will take awhile to work though.

If you’re a young adult, drinking alcohol can have long term effects on your health

A new study revealed something that young adults probably aren’t considering: even if you quit drinking alcohol at a young age, it can still have long term health effects. The researchers called these effects “silent but permanent” injuries and could mean that alcohol will cause problems with health as the young people reach their 60s and older.

Whether it’s binge drinking on the weekends or just a steady stream of casual beverages after work during the week, drinking alcohol isn’t something to take lightly. If you’re going to drink, know the risks, and make smart decisions about drinking alcohol.

Friday Fallout: Drinking And Driving, Snapchat, And Snap Decisions
Next Post: Another Drunk Driving Loophole Bites The Dust In Oklahoma