Drinking And Driving On A Segway?

You are here: Home / Offbeat / Drinking And Driving On A Segway?
September 4, 2014 by Matt Talley 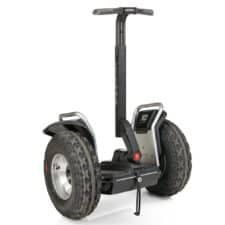 When Segways first appeared in 2001, they were labeled the transportation of the future. Gliding silently over sidewalks and pathways, Segways were designed to get you where you needed to go faster than walking. Tourists all over the United States use them for city explorations, and law enforcement use them to patrol large city blocks.

But in Norway, Segways were banned up until July 1st, 2014. The vehicles were considered mopeds in the country because they had a top speed of 20 km or 12 miles per hour, and that means anyone driving them would have had to have a driver’s license, vehicle registration, vehicle insurance, and be required to wear a helmet while riding. The ban was lifted in the hopes of improving the flow of traffic in busy areas.

Unfortunately, almost as soon as the ban was lifted, Norway had the distinction of having the first man arrested for drinking and driving on a Segway. After witnesses noticed he was acting strangely and was struggling to keep his balance on the vehicle, police arrested him on suspicion of drinking and driving. They are currently waiting on blood alcohol concentration (BAC) results.

Because Segways require a driver’s license in Norway, if convicted, the man will be held accountable to Norway’s strict driving under the influence (DUI) laws. The punishment will depend on what his BAC is, but if it’s as high as .10 he’ll pay fines, serve a mandatory jail or hard labor sentence, and have a suspended license. Norway also has a payment structure based on wage – if your blood alcohol level is more than 0.05%, the fine will be based on 1.5 months of your current wage.

Drunken Segway riding is only one of the weird ways people have been arrested for drinking and driving. From Barbie cars to ride-on lawn mowers, drinking drivers have learned the hard way you should never get behind the wheel of any motorized vehicle after drinking.

No matter what type of vehicle you drive, think before you drink, and be sure to have a designated driver to get you home safe.

Installing An Ignition Interlock Is Easy With Guardian Interlock
Next Post: Back To School A Good Time To Focus On Teen Distracted Driving