Driving on 4 Flat Tires: “Is Something Wrong, Officer?” 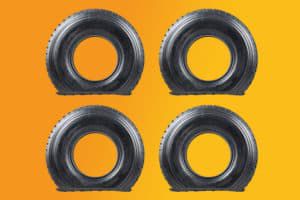 Maybe you read about a winner of the Miss Washington pageant who had to give up her crown in 2016 because she was arrested for DUI after she was pulled over for driving with two flat tires.

Recently Florida was the scene of an event twice as dramatic. A motorist was arrested in Port Lucie for driving with four flat tires. The woman was pulled over not just for the flats, but for driving under 10 miles an hour in a 40 mph zone.

What makes the story a bit scary is that the woman in question did not think anything was wrong. If you’ve ever driven with one flat tire, much less four, you know that it does not feel normal.

That’s scary because if she was oblivious to the effects of driving with four flat tires, she would have been oblivious to any car or pedestrian she hit as well.

Fortunately, no cars or people were hit. But the fact remains that it’s possible to get in a car and drive despite a level of impairment that is almost incapacitating. That is the reason that ignition interlocks are the preferred response to drunk driving. It’s far too easy to drive a car drunk. Having an ignition interlock makes it impossible, which helps protect society from repeat drunk drivers.

Florida should require ignition interlocks for all drunk driving offenses, as 31 states now do. It’s up to concerned citizens to make this happen. The drunk drivers aren’t listening – as we’ve just seen, they can’t even hear.

How Not to Refuse a Florida Sobriety Test: Bite the Cop
Next Post: Missouri Once Again Spurns DUI Checkpoints »