Drunk Drivers Not Learning From Mistakes In Maryland

You are here: Home / General Information / Drunk Drivers Not Learning From Mistakes In Maryland
September 29, 2016 by Matt Talley 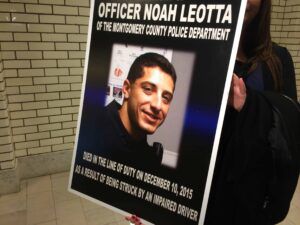 When you have kids you try to teach them a few of the golden rules: use your manners by saying please and thank you; if you fail, get up and try again; and when you make a mistake, learn from it, and learn from the mistakes of others.

It’s learning from the mistakes of others that is important to keep in mind when you see or read about drunk drivers, but a few people in Maryland seemed to have skipped this lesson. Not even a year after Officer Noah Leotta was crashed into and killed by a drunk driver, another State Trooper has been involved in a crash on the side of the road.

The trooper had been pulled over on a routine traffic stop and was standing on the side of the road when a speeding car drove straight toward him. The trooper saw the car approaching and told the car he was dealing with to move out of the way, and that’s when the speeding car crashed into the trooper’s vehicle. It rolled over and caught fire.

The driver of the speeding vehicle, a drunk driver, was apprehended. He refused to submit to a breathalyzer and he’s been charged with impaired and reckless driving.

Thankfully the trooper in this case wasn’t injured, but it didn’t turn out that way for Officer Leotta. After he was struck and killed by a drunk driver his family, coworkers, and local lawmakers sprang into action and petitioned for Maryland to have an all offender ignition interlock law. Mothers Against Drunk Driving (MADD) joined in too and dedicated their report on ignition interlocks to Leotta.

The law passed, and drunk drivers in the state of Maryland can now opt in to the ignition interlock program upon a first .08 conviction and continue driving normally. If the driver has a first conviction with a blood alcohol concentration (BAC) over .15, he or she will be required to install the device.

Hopefully more people take note of the mistake this driver made and remember what happened to Officer Leotta. Drunk drivers have the power to kill anyone, not just a police officer, and Maryland is safer now with ignition interlocks on board to stop them.