You are here: Home / Offbeat / Would You Like A Drunk Driving Charge With That Transit Sign?
December 26, 2017 by Matt Talley 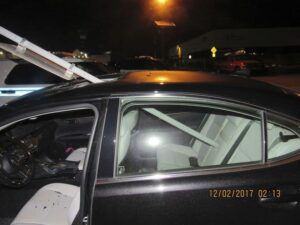 There are many reasons why alcohol and driving don’t mix. Alcohol can give you a feeling of courage and invincibility. It can affect your judgement and your hand-eye coordination. It can also limit your vision and make you unaware that you’re speeding or swerving. Because of the effect of alcohol, what started as a quick drive can end in a drunk driving charge. Or, in the case of a New Jersey woman, a drunk driving charge plus the pesky issue of a transit sign sticking out of the roof of her car.

Police were surprised to see a vehicle with excess cargo driving down busy Route 46 in South Hackensack, New Jersey. She was pulled over, and the arresting officer asked her why she was driving with a large transit sign sticking out of her roof. The interesting part? She didn’t even realize it was there.

Apparently, she had been driving for a while and the sign had, somehow and without her noticing, become stuck in the vehicle. Police took video when she was pulled over, and it’s hard to understand how it would be possible not to notice the sign. It’s positioned through the sun roof and impaled in the back seat of the car.

It didn’t take long for police to realize she was driving under the influence, and she was arrested on a drunk driving charge as well as careless driving. In New Jersey, that charge is going to result in her spending some time in court. If she’s convicted she could spend up to 30 days in jail, lose her driver’s license for up to a year, and she’ll pay up to $500 in fines and even more in other fees.

She may also be required to install an ignition interlock device in any vehicle she drives. New Jersey law states that any first-time offender with a blood alcohol concentration (BAC) of .15 or higher be required to install and use an interlock. An ignition interlock—a device that requires you to blow into it to monitor your blood alcohol content, is the only way to ensure this driver doesn’t drive drunk again.

Let’s hope this offender is required to drive with an interlock, because there’s no telling what type of sign she’ll bring home or what she’ll hit the next time she drives drunk.