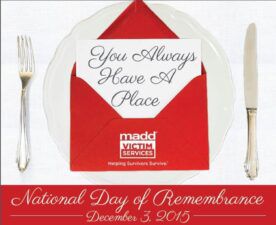 There’s no question that drunk driving kills thousands of people each and every year. The crashes they are involved in are published on the Internet, in newspapers, and on TV, but it’s still very easy for people to just glance over the news and never put together the fact that a living, breathing person lost their life to something as senseless as drinking and driving.

That’s why Mothers Against Drunk Driving (MADD) decided to honor their 35th anniversary with a National Day of Remembrance in Torrance, California. Held recently, the event was to remember anyone who has been killed or injured in a driving under the influence (DUI) or drugged driving crash as well as anyone killed or injured due to underage drinking.

It’s hard to believe Mothers Against Drunk Driving has been around for 35 years. Formed in 1980, it was founded at a time when 25,000 people were killed by drunk drivers every year. That number has now been cut in half, but the organization won’t rest until alcohol-related injuries and death are a thing of the past.

Although one of their mandates is to provide support for victims of drunk driving, the organization also reaches out to the public about the dangers of drinking and driving and underage drinking. It’s through events like the National Day of Remembrance that they remind people they are an organization that’s there for everyone who needs them.

During the National Day of Remembrance event there was a moment of silence, and that moment was followed by a reminder from MADD: anyone who needs support after experiencing injury or the death of a loved one due to DUI can find that support through MADD. They’ve been there for victims for 35 years, and although it’s reassuring that they will be there in the future, it would be far better if no one ever died due to drinking and driving again.