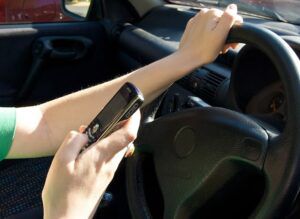 When it comes to drunk driving deaths, one death is one too many. Unfortunately a large number of alcohol related fatalities still occur every year, and that’s why Colorado is one of 35 states joining in for a campaign called ‘Moving Towards Zero Deaths.’

Strict driving under the influence (DUI) laws could be the reason why distracted driving may be taking more lives than drunk driving. Colorado DUI laws require penalties for first offenders including jail time, $1,500 in fines, a 9-month driver’s license suspension, and an ignition interlock program for anyone who wishes to drive during their time of suspension.

In contrast, distracted driving penalties in the state don’t hold the same weight. Although Colorado’s phone and texting while driving laws are considered primary laws where the officer doesn’t have to pull you over for another violation to issue a citation, the fines only range from $50 for a first offense to $100 for a second offense.

In order to make the Moving Towards Zero Deaths campaign successful, lawmakers need to address both drunk driving and distracted driving deaths by toughening up laws. Take DUI laws for example – there is currently a bill on the table that would impose a felony charge on anyone who has a 3rd or 4th DUI conviction in Colorado.

Will Colorado be able to reach their goal of a reduction in traffic related deaths by 2019 as planned? It’s a tall order to fill, but even one life saved is worth the effort.

The Lowdown On The HB 86 Ignition Interlock Bill
Next Post: 5 Important DUI Facts You Should Know