He’s Got The Best Chance Of Surviving A Traffic Crash

You are here: Home / Offbeat / He’s Got The Best Chance Of Surviving A Traffic Crash
July 28, 2016 by Matt Talley 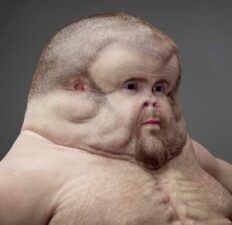 Thousands of people are involved in crashes every day, but not everyone who’s in one will survive their own traffic crash. Human beings just aren’t made to withstand the force of a car weighing several tons meeting another car head on, and even if you do survive, your injuries could be life altering.

That’s why Dr.David Logan from Monash University in Australia decided to launch Project Graham. He enlisted the help of a local artist to create Graham, a “human” who can withstand traffic crashes, and he’s someone you have to see to believe.

Graham was designed to withstand the pure force of a traffic crash in several key areas of the body. Although he’s hard on the eyes, he’s got a better chance than anyone of walking away from a crash.

Graham has a human sized brain, but his skull is bigger than the average person. That means he can have more cerebrospinal fluid and ligaments to brace his brain if he’s in a traffic crash that would otherwise cause brain damage.

Flying shards of glass can cause significant injury during a traffic crash, but thanks to his flat face, smaller nose size, smaller ears, and a lot of fat around his cheekbones, Graham won’t have as much of a problem with broken windshields.

Graham was designed with stronger ribs to give him better protection in a crash, and his chest is large and barrel-like to withstand impact from airbags and head on collisions.

According to the NHTSA, the United States lost 32,675 people to traffic crashes in 2014. That’s a lot of people who have lost their lives to something preventable, and these constant deaths are one of the reasons why Graham’s creators are sharing him with the rest of the world.

While we’ll never evolve to be like Graham, he definitely does the job of bringing awareness to the dangers of a traffic crash. Maybe just seeing him will get people thinking about the sheer power of their vehicles and what effect speed, alcohol, and careless driving can have on a person.