It’s the old story: a driver, alcohol, and a chicken wing.

In Suwanee County, Florida recently, a drunk driver veered onto the shoulder of the road, then over-corrected and found his car pointing the wrong way on the road. He corrected again – right into a tree.

Just another standard drunk-driving accident, one of thousands that happen each day on our nation’s roads.

The only difference was that the driver was eating chicken wing at the time of the crash. There are lots of things that can distract a driver: 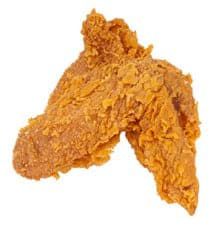 To that we must add chicken wings. Or, more broadly, eating while driving.

The driver in question was munching on the wing while driving under the influence of alcohol. That’s begging for an accident. Which he got. Fortunately, neither he nor anyone else was killed. But it could easily have happened, with both his judgment impaired and attention distracted.

Or the wings you end up with might not be chicken.