Is This The Most Shocking Anti-drunk Driving PSA Of All?

You are here: Home / Offbeat / Is This The Most Shocking Anti-drunk Driving PSA Of All?
May 17, 2016 by Editorial Staff 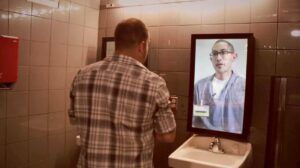 Imagine you’re at a night club and you head into the restroom to use the facilities. When you step out to wash your hands, the mirror starts talking right to you. Would you think you had one too many or that someone slipped something into your drink? That’s probably the reaction bar hoppers had when they took a look in the mirror and saw a man decked out in a prison uniform staring back at them.

What must have seemed like a hallucination was actually an anti-drunk driving PSA (public service announcement). Kris Caudilla, an actual prison inmate, filmed a video called ‘Reflection from the Inside.’ It was shot at the RMC correctional facility in Florida, and the way the conversation casually starts would seem shocking to anyone, drunk or sober, who saw it.

After he asks how the person is doing, he starts talking about how he’s currently in prison serving time for a drunk driving crash. It was a head-on crash that killed a police officer and father of four, and Caudilla takes complete blame for his actions. He mentions how he made the choice to drink and drive, and now that he’s serving 15 years for DUI manslaughter (driving under the influence), he wants others to know they don’t have to make the same choice.

Take a look at the video below:

The way the video is filmed, it seems as though the conversation is happening live. Because of that, it really has an impact on the men who stood there and chatted with him. A few of them appear visibly shaken, and they assured Kris they had a designated driver or planned to take a cab home.

It’s the shock value that makes this anti-drunk driving PSA stand out, and because its not an actor or a hypothetical scenario, Caudilla has a chance to make a real impact on people. Odds are, bar patrons may be seeing a lot more ‘live from prison’ mirrors in the near future.

There Are A Lot Of People Up North Who Are Driving While Impaired
Next Post: 2015 Holiday Drinking and Driving Stats »