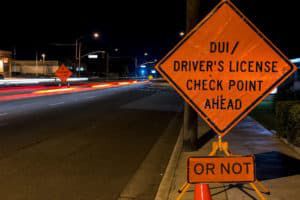 Sobriety checkpoints – roadblocks at which police stop cars and ask drivers if they’ve been drinking – are controversial. Most states at least permit them, and many use them as an efficient means of catching drunk drivers before they do harm.

But ten states have outlawed them on the basis that they conflict with the state constitution.

Missouri is on the fence. Missouri DUI checkpoints have not been outlawed, but for the second year in a row the Missouri House Appropriations Committee has allotted just $1 per year to them, signaling disdain for a law enforcement tool that is a staple in neighboring states.

The Case for Sobriety Checkpoints

The Supreme Court ruled in 1990 that sobriety checkpoints met Fourth Amendment requirements. The Fourth Amendment prohibits unreasonable search and seizure. The court ruled, essentially, that the “search” aspect of a DWI checkpoint was not invasive enough, as it just involved a slight delay and a question or two from the police officer. That is, the court implied, a far cry from storming into a home and emptying file cabinets.

Keep in mind that offices cannot just stop whatever driver they choose: the checkpoints must be announced beforehand, and a guidelines must be set: every tenth driver, say – so that discrimination does not come into play.

Moreover, sobriety checkpoints do work. The Centers for Disease Control (CDC) found that checkpoints can slice a good 20 percent off alcohol-related fatality numbers. Not only do officers at roadblocks nab drunk drivers, but drivers who pass the checkpoints on a night out tend to be more careful about drinking afterwards. The deterrent effect is well-known.

The Case Against Sobriety Checkpoints

Opponents of DUI checkpoints believe that stopping multiple drivers without any probable cause is an unreasonable search, and exactly what the Fourth Amendment was designed to prevent. Stopping people and demanding to see their licenses is, for some, a tactic too close to police-state methods. There are also worries that the checkpoints exist to troll for fines and target undocumented immigrants. The dissenting Supreme Court judges in the 1990 case cited other rulings which condemned “suspicionless random stops of motorists for investigatory purposes.”

Even without DUI checkpoints, Missouri has resources to fight drunk driving – the Appropriations Committee allotted $20 million for anti-DUI efforts. The most effective of these are:

For the present, Missouri DUI checkpoints are not a thing. Legislators have made their choice, and it’s up to law enforcement to use the tools available to keep the state’s roads safe.

Previous Post: « Driving on 4 Flat Tires: “Is Something Wrong, Officer?”
Next Post: Tennessee DUI Drivers: No Alcohol Sales for 8 Years? »