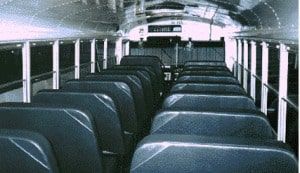 It’s enough to send a chill up any parent’s spine – three bus drivers in three different parts of the country have been arrested for driving under the influence (DUI) within one week. All three times the buses were full of children and, on two occasions, parents were along for the ride. It really makes you question why interlock devices aren’t required for all school bus drivers.

Two school bus drivers, one in Utah and one in Texas, were arrested this past week for driving under the influence. The driver in Utah had 67 students in her bus and was weaving in and out of lanes on the highway, while the driver in Texas had struck a tree with kids in his bus. Not even a week later, a school bus driver in Massachusetts was arrested for the third time after he was found driving a school bus under the influence with 25 high school students on board. Coming back from a cross-country meet, the driver was swerving all over the road and a concerned parent on board the bus contacted 911. The police met him in the parking lot of the high school and he failed all field sobriety tests.

Driving drunk or operating under the influence (OUI) in Massachusetts is a serious crime punishable by strict penalties. Because this was the bus driver’s third DUI/OUI, he will receive a felony charge, license suspension for 8 years, fines payable up to $15,000, and possible jail time. The driver is also required to install an ignition interlock device in all vehicles he drives. But a quick look at Massachusetts OUI laws shows that an interlock device is also mandatory in Massachusetts for a second OUI conviction, so why wasn’t he driving with one in the first place?

Mothers Against Drunk Driving (MADD) has statistics showing that interlock devices reduce the likelihood that a drunk driver will drive again by up to 67%. If any of the school bus drivers arrested for DUI had one installed in their school buses, they wouldn’t have been able to start the bus before driving away with kids on board.

Thankfully, no one was injured in any of incidents this past week, but you can’t deny that it’s alarming three school bus drivers were arrested for DUI in such a short time span. It makes you wonder how many school bus drivers are driving under the influence and just haven’t been stopped yet?

Crashing In Colorado? An Ignition Interlock Will Be Waiting For You
Next Post: New Guardian Interlock Location:
Frank’s Auto Body & Detail, Perham, MN