Seattle Man Arrested For Drunk Driving After Crashing Into Macklemore

You are here: Home / News / Seattle Man Arrested For Drunk Driving After Crashing Into Macklemore
August 25, 2017 by Matt Talley 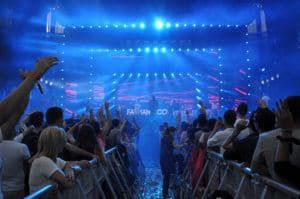 It’s become so common to hear of celebrities arrested for drunk driving that people don’t even bat an eye anymore when the mugshots appear in the news, but it is unusual to hear about a celebrity hit head-on by a drunk driver. However, that’s what happened to Seattle rapper Mackelmore recently.

He was driving in his home state of Washington on Whidbey Island, a popular tourist destination that’s extremely busy in the summer. He was coming around a curve in the road when a truck crossed the centerline and crashed into him head-on.

State troopers were on the scene quickly, and thankfully Mackelmore and his two passengers were able to walk away from the crash almost uninjured. The driver of the pickup didn’t fare as well because he wasn’t wearing a seat belt. He was taken to the hospital before he was sent to jail, arrested for drunk driving.

Mackelmore is fortunate he was able to get out of his car and walk away after a head on drunk driving crash, because other people in the same situation have died due to the injuries they’ve sustained. Crashes like these and the lives they claim are just one of the many reasons why Washington State requires ignition interlocks for all offenders.

According to Mothers Against Drunk Driving (MADD), someone who drives drunk will get behind the wheel after drinking an average of 80 times before they are stopped by police and arrested for drunk driving.  With an ignition interlock on an offender’s vehicle, he or she won’t be able to start the car if they have alcohol in their system; without an interlock, that person could cause a crash just like the one Mackelmore was in.

This won’t be the last time there’s a celebrity mentioned along with drunk driving, but thankfully Mackelmore has lived to rap another day and the driver is in jail.

This Florida Drunk Driver Took To The Beach, Literally
Next Post: Florida Ranks 17 In WalletHub’s Top 20 Strictest States For DUI