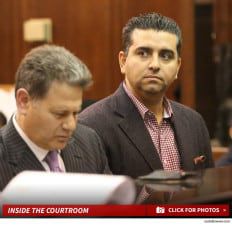 When New York City police pulled over a yellow corvette in the early hours of November 13th, they were probably surprised at who rolled down the window. The car had been stopped because it was swerving in and out of a lane, and the Cake Boss himself, Buddy Valestro, was behind the wheel. The arresting officer said he could detect the scent of alcohol and Mr. Valestro failed a field sobriety test. He was arrested for driving while intoxicated (DWI) and driving while ability impaired (DWAI).

Because Mr. Valestro was arrested in New York State, he’s going to have a lot on his plate as far as penalties for his DWI and DWAI. A DWI in New York is a criminal misdemeanor, and to be charged with a DWI he would have had to have a blood alcohol concentration (BAC) greater than .08. Mr. Valestro’s BAC registered at .09 on a breathalyzer.

If past celebrity arrests are any indication, the Cake Boss won’t get off easy when it comes to his drunk driving conviction. Take Michael Phelps for example – the Olympic swimmer was recently arrested for his second DUI and is currently in rehab. He was suspended from his swim team for 6 months and his DUI trial is scheduled for December. Justin Beiber is another high profile celebrity charged with DUI after he admitted to drinking alcohol, driving on a suspended license, and road racing in Florida. The details of his DUI case or probation aren’t public.

Fortunately for Buddy Valestro, no one was hurt when he was drunk behind the wheel, but he has a long way to go to redeem himself in the eyes of his fans after making the choice to drink and drive.