You are here: Home / Offbeat / Crazy DUI stories: A Raccoon Can’t Blow Into Your Ignition Interlock
October 23, 2015 by Editorial Staff 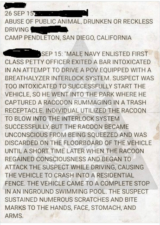 You’ve probably read about the drunk driver who told police that a stripper at a local nightclub was his designated driver, and you might have read about how a man drove a hot pink Barbie car home after he was drinking. But in the grand scheme of crazy driving under the influence (DUI) news, you can’t get crazier than this story.

So what does this drunk driver do when confronted with such a problem? He takes a look around, spots a racoon, and decides that the racoon will blow into the ignition interlock device for him. By squeezing the raccoon until the racoon passed out, he was able to successfully start his car.

Unfortunately the driver was said to have discarded the racoon on the floor of his car after squeezing, and when the racoon woke up, there was a bit of a tussle that resulted in the man driving into a swimming pool.

Almost as soon as this report went viral, another story came out. Various news outlets discovered that the original story was, surprise, a fake report. Much to the relief of racoons everywhere, squeezing them to start your car when you’re drunk isn’t possible. Not only is it impossible to have an animal start your ignition interlock equipped vehicle for you, but if you try to hold a racoon, you could end up seriously injured long before you got him to your car.

One news outlet stated that they understand if people are disappointed, but it is a funny story and a good reminder: you won’t need to fool your ignition interlock if you don’t drink and drive.

Will Your Child Drink And Drive?
Next Post: What’s The Worst That Can Happen If I’m Drunk Driving?