You are here: Home / Law / Drake’s Law Ready For Signature In Minnesota
June 15, 2016 by Matt Talley 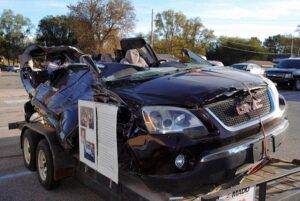 When a drunk driver kills a five-month-old baby, you stand up and pay attention. When you hear that the drunk driver in question was a repeat offender and had an off-the-charts blood alcohol concentration (BAC), it makes you want to stand up and do something.

That’s what’s happened in St.Paul, Minnesota, and although it’s taken a long time to come to the end of the line, Drake’s Law is now waiting for the Governor’s signature.

Drake’s Law is named for baby Drake Bigler of Marshall, Minnesota. He was in a vehicle driven by his mother when drunk driver Dana Schoen hit them head on. The crash destroyed the side of the mini van, and although both Drake and his father were taken to the hospital for treatment, the baby died shortly after.

This wasn’t Schoen’s first DUI offense. He was previously charged for driving impaired and pleaded guilty to three counts of criminal vehicular homicide as part of an agreement. He was given 57 days already served and only ordered to pay a $50 fine.

When apprehended Schoen had a BAC of 0.351. When you consider that 0.35 to 0.40 can be lethal due to alcohol poisoning, it’s shocking he was coherent enough to start the vehicle let alone drive it.

For the death of baby Drake, Schoen pleaded guilty and was sentenced to four years in prison. If Drake’s Law had been in effect when he was sentenced, Schoen would be spending a lot more time behind bars. When signed by the Governor, the new law will increase the maximum sentence to 15 years if a repeat offender with a previous 1st or 2nd degree driving while impaired (DWI) conviction commits vehicular homicide while drunk.

When a law like this passes it’s bittersweet. The new law will work to stop repeat offenders from driving drunk and killing someone like Schoen did, but no matter if justice is finally served, it won’t bring Drake back.

Not Everyone In Colorado Is On Board With DUI Law
Next Post: Roanoke County Kicks Off DUI Task Force