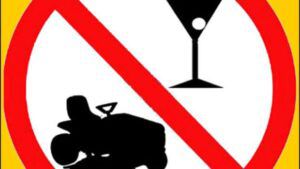 “Is that a beer on your mower?” isn’t a sentence you hear every day. For police officers, it’s something they have to say more often than you think.

Case in point? A man violated Kansas drunk driving laws when he decided to take his lawnmower out for a spin while drunk. According to the offender he’d went to visit his son while driving his lawnmower and he’d had five beer and some shots of hard alcohol before he decided to drive home. That’s when police pulled up beside him and asked him if he’d been drinking.

The offender didn’t think it was a big deal at the time, but when the police pulled out the breathalyzer, things got serious fast. With a blood alcohol concentration (BAC) of .180, he was twice the legal limit of .08 and, much to his surprise, was about to be arrested for his second Kansas drunk driving charge.

He did try to argue his way out of it, basing his argument on the fact that you don’t have to insure a lawnmower so it shouldn’t be considered a vehicle, but his argument fell flat. According to Kansas drunk driving laws, you can be charged for drunk driving on any device that a person or property can be transported on. That includes ride on lawnmowers, carriages, or even your pet horse.

When the offender went to court his driving under the influence (DUI) charge was dismissed. What wasn’t dismissed so easily was his driver’s license suspension, and the Kansas Department of Revenue told a news outlet that they don’t have to dismiss a driver’s license suspension just because a criminal charge of DUI is dismissed. If they have evidence that someone is driving impaired, they can suspend for the license for a set amount of time.

All in all, this offender got off fairly easy. With Kansas drunk driving laws requiring five days up to one year in jail for second offenses and $1,750 in fines, he should happily take the suspension and interlock and move on with his life. As for his lawn, hopefully he finds someone else to help him cut it.