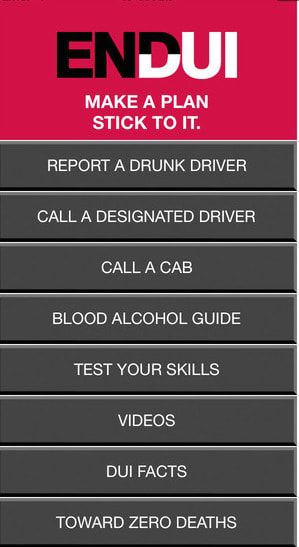 They have ignition interlock programs in place for repeat offenders and both driving under the influence (DUI) and driving while intoxicated (DWI) penalties in place for people who decide to drink and drive in the state, and now Maryland is turning to tech to continue their fight against drunk driving.

ENDUI, otherwise known as ‘End DUI’, is a new app developed by the Maryland Highway Safety Office and funded by the National Highway Traffic Safety Administration (NHTSA). It’s designed specifically for smartphones users, because even though people are having a fun night out with friends, they spend a lot of time with their phones in their hands.

ENDUI has blood alcohol concentration (BAC) calculator so people using it can enter their gender, weight, height, and how many drinks they’ve had to get an approximate calculation of what their blood alcohol level could be. There are a few games users can play too, and they’re almost like digital versions of field sobriety tests.

One game has the user pressing a brake button when a pedestrian pops up on the screen or a car stops in front of them, and it assesses the person’s reaction time while avoiding a collision. Another game is modeled after the retro game SIMON – users watch as road signs blink and try to recall the order as each round gets more difficult.

In addition to the BAC calculator and games, the app also supplies phone numbers so users can easily contact a sober driver and has GPS to locate a cab nearby.

Although the app is designed as an assessment tool, it also comes with a near constant warning – no matter what your BAC is calculated at or how you perform on the games, any amount of alcohol consumed can result in an impaired driving charge. To really ENDUI, you shouldn’t drive after drinking at all.