You are here: Home / News / To Fight Drunk Drivers, Maryland Rolls Out A Mobile Breathalyzer Truck
January 11, 2017 by Matt Talley 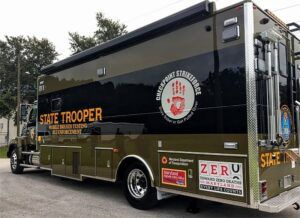 Any police officer will tell you that it takes a long time to process a drunk driver. The timer starts ticking from the moment an offender rolls down the window and starts answering questions or when the police pull up after a crash.

Once the officer has reason to suspect someone of drunk driving, they’ll be asked to perform a field sobriety test. If they fail that they may be required to go back to the police station and submit to a breathalyzer test, and that’s where a significant amount of police time and resources is spent.

The mobile breathalyzer testing truck will have everything police need to test drunk drivers, and if someone needs to be picked up because they’re too drunk to drive, police will keep them right in the truck until a sober driver arrives.

The truck will speed up the process of arresting drunk drivers, but it also serves another purpose: protecting police officers. While out on the roads Maryland police officers have been hit by drivers thirty eight times this year, with Officer Noah Leotta’s hit at a drunk driving checkpoint in 2015 being the most notable. That crash spurred lawmakers to pass Maryland’s all offender ignition interlock law, requiring all drunk drivers in Maryland to install an interlock upon conviction.

With the interlock law on the books, a mobile breathalyzer truck in action, and a focus on protecting police officers in the line of duty, Maryland police are more equipped than ever to handle drunk drivers and stay safe while doing so. Let’s hope 2017 is the start of a true decrease in drunk driving in Maryland.

Noah Leotta’s Face Will Grace Maryland Ignition Interlocks
Next Post: Here’s What Can Happen If Someone Avoids A Drunk Driving Checkpoint