What’s It Like To Drive Behind Someone Who Is Driving Drunk?

You are here: Home / Offbeat / What’s It Like To Drive Behind Someone Who Is Driving Drunk?
October 16, 2015 by Matt Talley 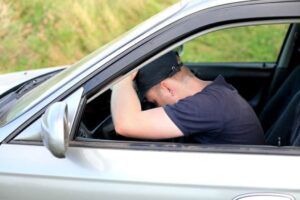 How do you know if someone is driving drunk? Whether you suspect them of driving drunk because they’re speeding up and slowing down, swerving in their lane, or blowing through stop signs, actually picking up the phone is judgment call people have to make every single day. More often than not, people don’t make the phone call to the police to report a drunk driver because they’re not 100% sure.

If you want to know exactly what someone looks like when they are driving drunk, look no further than YouTube. There are numerous videos video taping drunk drivers, some that are too disturbing to even watch, but few fall into the same category as one video called, “Crazy Drunk Driver Crashes.”

The video, featured on CBS in 2011, involves two people driving down the highway behind a suspected drunk driver. They’ve already called the police when they began shooting the video, and they detail what they see up until the point the driver crashes. Just a warning: the passenger and driver use foul language occasionally.

Thankfully the driver didn’t crash into anything other than a tree. As you can see in the video, there are near misses with people who probably didn’t realize they were seconds away from being involved in a drunk driving crash.

If you’re in a similar situation, how can you really tell if that person in front of you is driving drunk? Unfortunately you can’t be 100% sure unless you’re in the vehicle with them and asking them to submit to a breathalyzer test. What you can do is contact the police and say you suspect the person beside you or in front of you on the road is driving drunk, and law enforcement can take it from there.

You might not be right about someone driving drunk 100% of the time, but if you are correct, you could save a life. Isn’t the thought of that alone worth a phone call to 911?

One Reason To Feel Happy You Have An Ignition Interlock Device
Next Post: Honored Police Officer Loses Daughter To Drunk Driving