Will You Kick Off Your New Year With A Car Breathalyzer?

You are here: Home / General Information / Will You Kick Off Your New Year With A Car Breathalyzer?
December 31, 2014 by Editorial Staff 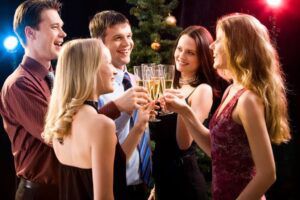 How much do you know about those drinks you’ve been tipping back during the holidays? With New Year’s Eve approaching and people making party plans for the biggest night out of the year, it’s a good time to take a look at how alcohol affects your body when you drink it, what’s a myth and what’s a fact when it comes to drinking, and why driving after drinking can start off your new year with driving under the influence (DUI) penalties like jail time, fines, and the possibility of a car breathalyzer.

To bust a few drunk-driving myths for their viewers, Fox News did some hands on research. One of their correspondents sat down with a group of bar-goers and had a few drinks – in total the group had 8 glasses of wine, 8 bottles of beer, 10 Jack Daniels and Coke, and approximately 13 glasses of vodka. The goal was to get drunk and they achieved that, and along the way they tested out a few pocket breathalyzers and discussed alcohol myths. You can view the entire segment here, but here’s a recap of what they found out:

Alcohol myth #1 – Coffee or a shower will sober you up

One of the myths the segment discussed is how a cup of coffee, a shower, or even sleep won’t sober you up if you’ve been drinking. That’s because your body can only metabolize approximately one drink every two hours, so depending on how much you drank, it could take a long time to sober up completely.

Alcohol myth #2 – Once I stop drinking for the night, I’m on my way to sobering up

Another myth that has direct implications for drinking and driving is how people will stop drinking at the bar and feel relatively sober when they head home, but when stopped for a roadside test, will fail field sobriety tests or blow over the legal limit on a breathalyzer.

To bust this myth, the participants took repeat tests on pocket breathalyzers as they drank, and they watched their blood alcohol concentration (BAC) increased. Testing showed that even ½ hour after they had stopped drinking, their BAC was still inching up on the breathalyzer.

Watching a bunch of people get drunk might be entertaining, but the point the news segment made is an important one. Before you head out for New Year’s Eve this year remember these alcohol myths are just that – they’re myths, and if you drink, don’t drive. That way you’ll avoid kicking off your New Year off with a DUI conviction and a car breathalyzer program.

‘Tis The Season To Recognize The Good Deeds Done By Police
Next Post: Happy New Year From Guardian Interlock