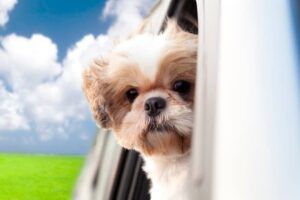 There’s a long list of things people blame their dogs for, some of them justified, some not. My dog ate my homework, messed up the living room, or ate the last piece of cake are all good excuses people use all the time, but if you’re thinking of blaming your dog for erratic and drunk driving, think again: after one man in Manatee County, Florida did that, he ended up in jail.

Right before 8 pm one evening, an officer was on a routine patrol when he saw a car speeding past. While he was turning around to pursue, the car blew through a stop sign and continued speeding. The officer chased him until the car ran into a ditch after failing to turn and then overcorrected and hit another ditch. The driver of the car continued to drive until he hit a house, then he jumped out and a foot pursuit began.

He was spotted tripping and falling in several front yards, and when the K9 unit was released, they followed the trail and found his t-shirt. They tracked him into a church and apprehended him where he was hiding in a bathroom.

After commenting that the officer chasing him was slow, he proceeded to explain that he ran because he felt like it and that the entire incident was his dog’s fault. He said, “My dog was driving that car,” and yet he had no dog with him and do evidence of a dog showed up anywhere after he was apprehended.

Shortly after he was caught he complained of injuries and was taken to hospital, but was released and booked into jail with a $26,000 bond pending.

It’s one more crazy DUI story out of Florida, and one more driver who didn’t want to face the consequences. Thankfully, no dogs were charged in this case, only a human who made the wrong decision to drink and drive.

What Will Haunt You? The Penalties Or The Shame Of Drunk Driving?
Next Post: Shaffer’s Muffler and Automotive in Corpus Christi, Texas »