DUI Laws Don’t Apply To Dogs, But They Do To Dog Owners 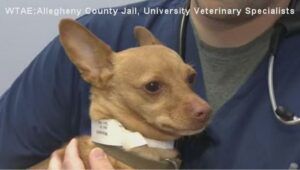 It goes without saying that you shouldn’t drink and drive. Every state has drunk driving laws they’ve put into place, and with all of the anti-drunk driving public service announcements (PSAs), checkpoints, and campaigns out there, it should be common sense to avoid drunk driving at all costs.

But not everyone has common sense, and the number of drunk drivers on the road who disregard drunk driving laws remains at staggering levels. Sometimes these drunk drivers will even take children along for the ride, while others are content to bring along their drunk dog.

Yes, a drunk driving arrested in Pennsylvania recently also had a very drunk Chihuahua along for the ride. The driver was found inside his vehicle with an open bottle of vodka, and he was pouring it into a tray in the center console for the dog, who was drinking it.

At 12 pounds, the dog would have limited tolerance for hard alcohol, and even a small amount of vodka would be enough to kill the canine. What happens after they drink is similar to what happens to a human: they lose their coordination, become sleepy, and their heart rate can slow down. With a large amount of alcohol a dog’s blood stream can become acidic and, unless they receive immediate treatment, they can die.

The dog in this case was already staggering while he walked, and his pupils were dilated. Police removed him from the vehicle and took him to a vet where he received an IV to remove the alcohol from his system. He’s had to receive additional treatments but is doing well and living at an Animal Control officer’s house.

The dog’s owner was charged with driving under the influence and animal cruelty, and although it’s not known whether or not he’ll regain custody of his dog, the fact that he also threatened to shoot and kill the arresting officers at the scene makes it seem unlikely.

It’s not the first case of someone disregarding drunk driving laws and it won’t be the last, but at least it should be the last time this dog gets into a car drunk.