No More Ride Sharing In Austin: Uber & Lyft Pull Out 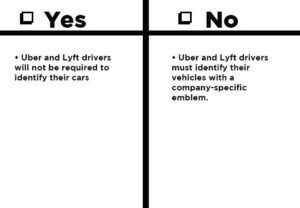 Ride sharing has exploded over the past few years. Instead of drunk drivers grabbing a taxi or bus to get home, people in need of a ride are now turning to Uber and Lyft as a viable option for a safe way home. The popularity of the service has meant a quick expansion from coast to coast, but that expansion has now abruptly hit a stop sign in Austin, Texas.

Lawmakers in Austin have become concerned over the safety of passengers who use Uber and Lyft, and they launched an attempt to regulate these ride sharing services through finger printing of drivers, adding identification to Uber and Lyft cars so they are easily recognized, and not allowing the pick up and drop off of riders in certain lanes. They also wanted to back a labor movement that wasn’t too happy with the ‘gig’ format of ride sharing, where drivers are not employees and aren’t entitled to what they deem as a fair wage.

Uber and Lyft didn’t look upon these regulations favorably, and they launched Proposition 1 in order to overturn them. Unfortunately for ride sharing fans everywhere, they lost the vote by 56% to 44%. That means the regulations stand, and in response to the loss, both Uber and Lyft have suspended operations in Austin.

Austin officials have said they’re happy to have ride sharing in the city, but it has to be on their terms and not based on policies made up by Uber and Lyft. What does this mean for Austin drunk drivers? They’ll now have to turn back to taxis and public transportation to get a ride home, and this could mean an increase in drunk driving in the city.

But it’s what this outcome means for ride sharing across the United States that’s even more troubling. Given that Uber and Lyft have been in the news for various issues, will every city in the USA that uses ride sharing follow suit and require require these companies to comply with city-based policies and procedures? It’s a distinct possibility, and if so, there could be a huge jump in drunk driving everywhere.

Previous Post: « DUI Wolf Pack Is On The Prowl In Florida
Next Post: What’s New In Minnesota Drunk Driving?