You are here: Home / News / Impaired Driving Crash Ends With Oregon Man Sitting At Bar In His Car
May 24, 2017 by Matt Talley 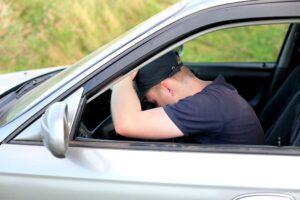 Stop me if you’ve heard this one: a man walks out of a bar after a night of drinking and puts the keys in the ignition of his car. It’s the beginning of almost every impaired driving story ever told, and while this story from Salem, Oregon ends just like the others, there’s a bit of a twist too.

The man was drinking at the Triangle Inn in Salem when he decided to leave. Video from outside the bar shows him heading to his car, getting in, and then driving straight back into the building. You can see on the video how he drove his car straight through the wall and right into the bar he was just sitting at, and how off-guard the sudden appearance of a vehicle caught the people inside.

What happened next? Incredibly no one was injured in this crash, but he’s been arrested for impaired driving in Oregon. That means he’ll be focusing on more than just the criminal mischief charge he received for driving through the bar. As a impaired driving offender in Oregon he’ll be spending time doing community service, working to pay fines up to $2,000, and trying to figure out how to get around because his driver’s license will be suspended for at least one year.

Crashes like these make you stop and think about how easy alcohol makes something that seems impossible, like crashing through a building, and makes it as simple as turning the key in the ignition and stepping on the gas. This isn’t the first offender who’s caused serious property damage while impaired driving and he won’t be the last, but maybe the shock of what he did will make sure it’s the last time for this particular driver.