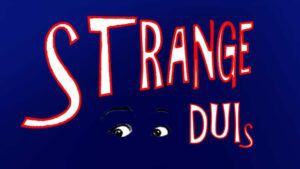 Most drunk driving arrests follow a predictable pattern: the driver goes through a checkpoint or is spotted by a police officer, they are pulled over and asked to submit to a breathalyzer test, and if they blow over. 08 they’re arrested for drunk driving. But drunk drivers are unpredictable themselves, and because anything can happen when you’re driving under the influence, there’s a lot of strange drunk driving stories out there that don’t follow a typical pattern.

Take a look at a few of the strange drunk driving stories from August.

Just hitting a pole wasn’t enough for this driver

Hitting a pole with your car is an easy thing to do when you’re driving under the influence, but one man in Detroit wasn’t satisfied with just hitting a pole. He crashed his truck into a utility pole near a playground where kids were playing, and he did it with a 40-ounce beer in his hand.

Not only that, but when police arrived they watched as several more 40-ounce beers came rolling out of his truck, and he was so drunk he tried to flee but he only made it as far as the alley before he was found staggering around.

Odds are she would have failed her DUI classes anyway

A repeat offender from Riverside, Illinois was speeding when police pulled her over. The police officer suspected her of drunk driving, and when she was asked to get out her car she told the officer she was speeding because she was late for an appointment.

What’s really ironic is that the appointment she was late for was court-mandated DUI classes, and she was drunk while she was driving there. She blew 0.196 on the breathalyzer, and after her arrest the police discovered she was also driving under the influence of drugs and had open alcohol in the car.

That’s two fails in one day for her: one for driving under the influence, the other for her DUI class.

How drunk do you have to be to hit your own house?

How do you feel the morning after the night when you drove drunk, crashed into your own home, and set it on fire? It’s hard to believe, but that just happened to a Milwaukee man recently.

The man was driving drunk near his home and lost control of his vehicle, smashing straight into his ground floor apartment. People on the second and third floors were forced to climb to safety when the truck caught fire and it spread to the building, but the driver didn’t bother calling the fire department: because he lived there he knew exactly where the garden hose was, and he tried to put the fire out himself.

There was over $70,000 worth of damage to the building and the vehicle, and some neighbors only escaped with what they were wearing. It just goes to show how easy it is for drunk driving to destroy everything you’ve worked for, and everything other people have worked for too, in a split second.

These are definitely strange drunk driving stories, but they’re also pretty common in the world of DUI. When you mix alcohol and driving, anything can and will happen, so if you drink, just don’t drive.