You are here: Home / Law / The Tide Turns as Strong Ignition Interlock Laws Sweep The USA
June 25, 2014 by Matt Talley

It began with a trickle, and now it’s a tide that is sweeping the country.

In 2005, New Mexico became the first state to require ignition interlocks for all DUI convictions, including first offenses. An ignition interlock is a device that prevents a car from starting if the driver has been drinking. 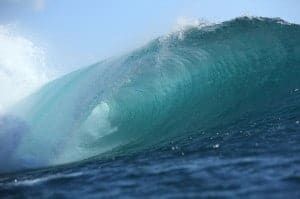 The results of New Mexico’s law were dramatic – a 38 percent decline in drunk driving deaths.

Within a couple of years Arizona and Louisiana had followed suit, and deaths from alcohol-related road accidents went down sharply in those states as well. From this trickle came a steady stream of legislation; currently 23 states require interlocks for all offenses.

The wave continues. Now Delaware, Pennsylvania, and Ohio have proposed mandating interlocks for all offenses.

Why is that important? Because if they pass, a majority of U.S. states will now be placing an ignition interlock between impaired drivers and their vehicles every time they offend. 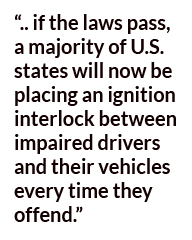 The tide will have turned.

And the evidence suggests that the tide is indeed about to turn. Interlock bills like these often pass unanimously or near-unanimously once legislators and the public are aware of their benefits.

Clearly, public sentiment is on the side of strong ignition interlock laws for first-time DUI offenders. Within a few years the rest of the states will catch up and enact similar laws. The lives saved each year will number in the thousands.

But that’s the long term goal. For now, we’re moving toward 25 states. And that’s not half bad.