Underage Drinking So Intense, The Air At The Party Registered On Breathalyzer

You are here: Home / Offbeat / Underage Drinking So Intense, The Air At The Party Registered On Breathalyzer
January 17, 2018 by Matt Talley 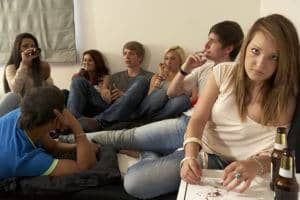 It’s a forgone conclusion that university parties will be host to underage drinking. What you’d hope is that the underage drinking wouldn’t be so out of control that the air in the room itself could register on a breathalyzer device.

It’s hard to believe but it’s true: a party held off-campus at American University in Bethesda, Maryland was packed to the rafters with underage drinkers. They were attending what’s known as “Tequila Tuesday,” and the alcohol was flowing steadily.

When police arrived, they found people locked in the bathroom and others jumping out of the second story window. They charged the six people hosting the party, and between the six of them they received 126 counts of providing alcohol to minors.

That’s bad enough, but the underage drinking isn’t the most shocking thing about this party; it’s the space it was hosted in. When police pulled out the breathalyzer to test the occupants in the house, the air in the house registered a .01.

Having a .01 breathalyzer reading isn’t overly significant if you’re a person blowing into the breathalyzer, but the air in the house would have to be overloaded with alcohol fumes in order to register on the device.

There would be two major concerns for the police who responded to the call about the party: one, they would be worried about underage drinking and alcohol poisoning, and two, they’d be on the lookout for underage drinking drivers.

The State of Maryland has a zero-tolerance law for drunk drivers under the age of 21, and that means if they are caught driving with even a .01 percent blood alcohol content (BAC), they could have their driver’s license suspended.

This is one party that will definitely go down in Maryland record books, and it’s safe to say both police and university officials won’t want a repeat of it anytime soon.