When Drunk Drivers Attack: What Nurses And Doctors Deal With Every Day

You are here: Home / General Information / When Drunk Drivers Attack: What Nurses And Doctors Deal With Every Day
September 2, 2016 by Matt Talley 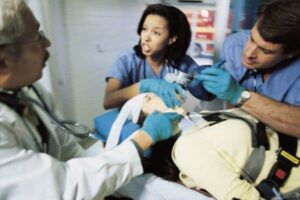 Some people understand more than others what can happen if you drink and drive. Victims of drunk driving crashes or family of victims who have died in drunk driving crashes know first hand the pain and carnage a crash can cause. Doctors and nurses see what happens after a crash first hand too, and they are often the people who do their best to save the victims and help the drunk drivers who have caused the crash.

It’s hard to believe these doctors and nurses, people who are just trying to help, can be mistreated by drunk drivers once they arrive at the hospital, but that’s exactly what happened when Steven Osten was brought in to the ER.

Osten caused a crash when he rear-ended another vehicle on a highway. His airbags deployed and he had a bloody face when police arrived, but he wasn’t in the mood for help from anyone. He smelt like alcohol and was so belligerent that officers had to restrain him with handcuffs because he wouldn’t sit still.

To ensure he was all right after the crash, police had him brought into the local hospital. A nurse attempted to wipe the blood off his face and he kicked her, then swore at others who were just trying to help him. They had to sedate him in order to transport him to another hospital so they could assess his injuries.

He could have walked away from the crash with a driving under the influence (DUI) causing property damage charge, but his behavior after the crash means he’s in real hot water. He’s been charged with two counts of DUI causing property damage and one felony count of aggravated battery on an officer, fire fighter, or EMT, and one felony count of resisting arrest with violence.

Because of these charges he’s in jail, and he may not be seeing the outside of his cell for awhile. It just goes to show: even if you cause a drunk driving crash that doesn’t injure another person, the effects of alcohol could result in you ending up in a situation you never would be in if you were sober.